Lychnis Year One and Year Two

One of my blogging contacts who lives in a more northern zone than I do, was asking me about the Lychnis 'Rose Campion' and getting it to bloom every year.   It's a biennial and each plant blooms once, copiously spreads it seeds, which will grow into 'year one' plants the next year, then wonderfully bloom and spead copious amounts of seeds again the year after that!

The trick is to keep some of the seeds from the flowers and throw them, unceremoniously, on the ground where you want them to bloom two years hence!   The seeds keep just fine in the cupboard for over two years, so you can make sure you plants some each year.

Or you could just buy them from nurseries and plant them two years in a row!

My contact was asking me if the seeds might stay dormant in the ground for more than one winter, and this I do not know.

But in case they do, the second picture is what the year one seedlings should look like when the snow is off:

﻿
﻿ ﻿ ﻿
﻿﻿
﻿ ﻿
The lychnis that I have always grown is a beautiful magenta pink. It's just one of my very favourites and was the first one of my plants that my husband ever commented on.


A friend of mine from Oregon sent me some seeds for white Rose Campion two years ago.  She is a Master Gardener and she told me to plant it as far away from the pink ones, as I could, as sometimes they will cross-pollinate and all become 'light pink'.   I planted half the seeds when I got them (in 2009) and the other half of the seeds last summer (2010), so I should have my first flowers this year and every year after.
That's according to my 'master plan' anyway!
Happy Gardening. 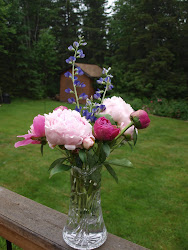